I took a short break f

rom my home on the Costa Blanca, Spain, to spend three days in the Rioja region of northern Spain and happened across the strangest cathedral — one inside which a hen and a rooster are housed in a gothic 15th century henhouse. Not only that, there is a macabre tale connected to these birds.

I was exploring the small medieval town of Santo Domingo de la Calzada in the heat of the morning when I decided to seek the coolness of the cathedral for a while. It was there I learned the legend of the innocent German pilgrim who lost his life because he failed to fall in love with the daughter of the innkeeper (poor chap!).

Santo Domingo de la Calzada is one of the pilgrim routes to Santiago de Compostela.

Even today you can see modern day pilgrims trudging through the town — but they are more likely to sport the latest lycra outfit on their state of the art cycle, or have ‘all the latest gear’ for walking, unlike poor Hugonell for that was the name of the poor German pilgrim.

UNREQUITED LOVE IS A DANGEROUS THING

Hugonell stayed at the local inn with his parents who were walking the pilgrimage trial. Unfortunately the daughter of the innkeeper immediately fell in love with him, but he did not reciprocate her feelings. I think he might have pretended to love her had he but known the consequences of not doing so.

The fuming girl hid a silver cup in his baggage and then accused him of theft! In those days thieves were hanged and so poor Hugonell met his end pretty quickly.

Now the tale gets stranger. Hugonell’s parents continued their pilgrimage to Santiago de Compestela and months later on their return journey they decided to visit the grave of their dead son, but before they could reach the chosen gravesite they had to pass the gallows where their son had been hanged for theft. To their amazement they found their son still hanging in the gallows miraculously alive.

“Mother! Father!” an excited Hugonell cried on seeing his parents, “Santo Domingo brought me back to life. Go and tell the Mayor to take me down from these gallows.”

Quickly his parents ran to the Mayor’s house, but the incredulous Mayor who about to eat his dinner retorted, “That boy is as alive as these two roast chickens we are about to eat.”

Have you guessed what happens next? … Yes, the chickens came to life, sprouted feathers and beaks and began to crow (well that’s what the legend reports).

So here I am on this very hot morning lingering in the cathedral looking at a huge 15th century gothic henhouse built in the memory of the most famous Santo Domingo miracle.

As I looked up I saw a piece of wood from the gallows and just to cheer me up there was a painting of poor Hugonell looking quite dead. 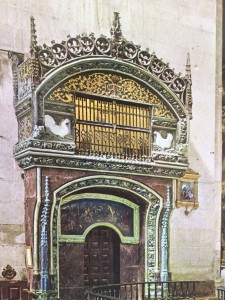 Still he didn’t die on the gallows did he? I think once Hugonell met the birds that saved him, he must have sang a little chicken song. In fact I think this might be a re-incarnation of Hugonell. Look closely at the man singing. J

Even if you have no interest in chickens, I’d recommend a day at Santo Domingo de la Calzada. It’s a great little place. There’s much to see and it’s ideal for a glass of wine in the shade of the plane trees in the square (at least I think they’re plane trees — species of tree are not my strongpoint).

If you fancy staying overnight it’s even got a 4* Parador which occupies a former 12th century hospital. History and luxury combined.

Find out more or adjust your settings.

This website uses cookies so that we can provide you with the best user experience possible. Cookie information is stored in your browser and performs functions such as recognising you when you return to our website and helping our team to understand which sections of the website you find most interesting and useful.

You can adjust all of your cookie settings by navigating the tabs on the left hand side.

Strictly Necessary Cookie should be enabled at all times so that we can save your preferences for cookie settings.

If you disable this cookie, we will not be able to save your preferences. This means that every time you visit this website you will need to enable or disable cookies again.